In my most EPIC POST EVAR! I mentioned that I have collected Non-Sports sets in the past. I now have to amend that statement, I am CURRENTLY collecting two Non-Sports series, both are budget oriented, both are from Topps.

Retail packs are $1.99 SRP and available at most mass-market retailers (Target, Wal-Mart, etc).
Hobby boxes are in the $40-$50 range, which seems awfully reasonable for what you get. Several box breakers report that you'll actually get TWO sketch cards in a box, along with a single full set of base cards and a number of inserts. Trader Crack actually has a nice box-break and scans of the cards if you want to see what they look like.

This set is sort of a continuity type set for Topps, in that the breakdown is pretty much the same as their old Star Wars Galaxy and Lord of the Rings Masterpieces sets. Not being a LOTR fan, I have no knowledge of the latter, but I did have the first three SW Galaxy Sets at one point, and I really enjoyed those because they were so different from anything else being produced at the time.

With Non-Sports I do prefer to actually piece a set together out of packs, it's kind of a challenge, rather than buying a whole box at a time (plus my wife wouldn't allow that much of a card purchase at this point in time).

So far I've bought four packs of retail, gotten 7 doubles and two silver foils, which is one more than the odds at this point. If you have doubles you'd like to trade, PLEASE let me know, I'd love to make a trade. 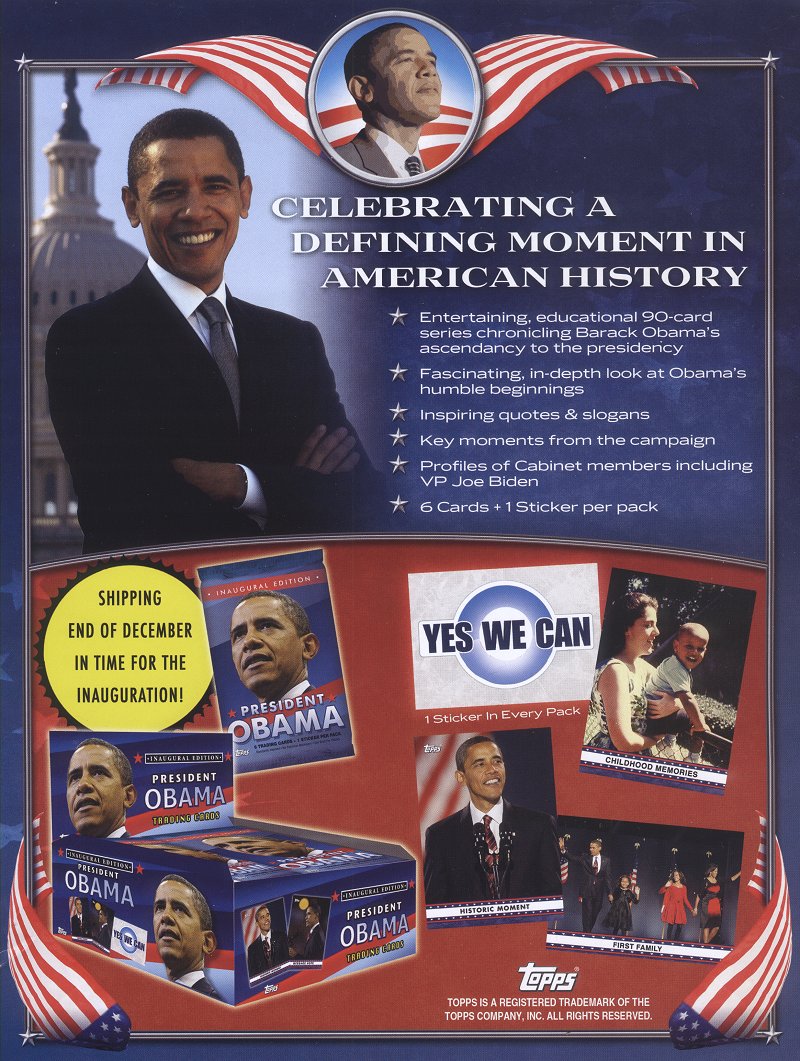 I don't think I've made it a secret that I'm a bleeding heart-liberal and I, for one, really enjoyed all the political inserts in this year's sports cards (for those of you who hated them, why not trade yours to me for your favorite teams?). I was excited when I heard about this non-sports set, frankly because I find American History and Politics fascinating, and bite-size trivial bits bring me joy. I also can't remember any other set like this ever being produced, not this close to the election that is. I'm sure there are other President trading card sets, but I've never seen a set of cards for one President issued BEFORE he took office.

The set itself is pretty standard, 90 cards and 18 stickers. The two inserts are case inserts (1 per for the HS Rookie, and 1 per 2 cases for the puppy redemption), and will most likely be the hot cards from the set, since there aren't any autographs or relics. Currently since the set is brand new and the inauguration has just happened, prices are varying WILDLY on eBay. Starting bids for the High School Card go from about $15 all the way to $150. The Puppy redemption isn't going for quite as much, believe it or not. There's also a poster included in boxes from Topps Directly (and maybe elsewhere too, not sure).

Here's the High School card, it's actually kind of ugly if you ask me. I never liked that 1978 Basketball design, and the photo is so blurry I'm surprised they couldn't find something better.

At a paltry two bucks a pack, I'm game to put a set together, and I may even buy one of the HS Singles off the bay if I can find one cheap enough. I don't care about the parallel set, but they aren't obnoxious either. I actually really like the foil stickers, they remind me a lot of the Shephard Farley "Hope" Print that has been so prevalent since the campaign. I've only bought ONE pack so far, but I'll be buying as much as possible over the next couple weeks.

If you're interested in reading my take on the Inauguration festivities this morning, hit up my personal blog.
Posted by William Noetling at 11:48 AM