I don't normally do mail-days unlike other blogs, mostly because I really don't have the time or patience to scan the cards that I get in the mail, and I haven't been very active in trading lately. I know I WANT to trade, it's just that with a 2-year old daredevil running around the Budget Apartment all of the time, it's difficult to sort cards without her try to eat them. I've tried giving her some cards of her own, you know; Topps checklists/David Wright garbage, Upper Deck pack fillers, etc., but she just wants Daddy's cards.

Be that as it may, I felt that I had to share the package that I got yesterday from the fantastic Eric Slette in Minnesota, who sent me without any expectations, an 800 count box FULL of Angels cards, one dating back to 1963! Needless to say, Christmas came a bit early for the Budget Sports Card Collector. In the paragraphs below I'll detail some of my favorite and some of the odder cards that came out of this box. I'm sure I'll find more, since the box contained just about EVERY Angels team set from 1984 to 1995 from ALL of the major brands, plus a very nice selection of older AND newer cards. I really owe Eric a nice box of Yankees, which is what he collects, but he's also a collector of Jeter, Posada and Rivera, so if you guys have any of those to trade to me, I can get those off to Eric. OR if you want to trade directly with him, email me at wmnoe at yahoo dot com and I'll forward you his email. He also collects

Speaking of trading, I know that I owe a package of Red Sox to the wonderful John Arnold in England, and I'll get that off as soon as I can, but the budget is very, very tight at the moment. Strangely enough, as I was working on this entry Mr. Arnold sent me ANOTHER package of Angels, including a cool Troy Glaus jersey from Fleer Authentix! John collects Red Sox if I'm not mistaken, with an emphasis on Mo Vaughn.

I also owe emails to a number of people who asked about their favorite teams, and I really want to trade for even MORE Angels, though I'm going to have to start getting picky, since I now have about five copies of EVERY Angel from '06, 07 and 08 Topps, and perhaps a dozen or more of some Angels from '08 Upper Deck Base. At this point, I'll only take base from those brands as throw ins, meaning I REALLY don't want any more at this point. I have 9 copies of the '07 Topps Vlad Guerrero, and while I'm actually tempted to keep going after them just to see how many I can amass, that kind of seems silly for someone who's trying to keep his collection at a reasonable level.

So, let's get on with the mail day cards shall we? 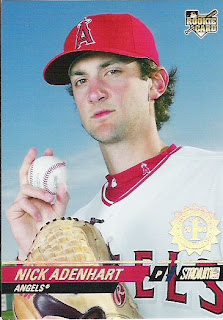 First up is a Nick Adenhart '08 Stadium Club 1st Day Issue numbered 509/599. I'm guessing that this is the "decoy" card in the SC packs, since it's double thick. I'm pretty sure this is my first Adenhart, as he wasn't the "RC" of choice for the Halos in the early '08 sets. Since I don't HAVE any SC from this year and at what, $25 per hobby pack I'm not about to buy some anytime soon, this is a great card for me. TONS of people have decried Stadium Club this year with it's outrageous pricing and Topps attempt to move reinvent the brand as a high-Mid-Level set, but I kind of like these. They remind me a lot of 1993 SC, which I thought was the best design since the first year. 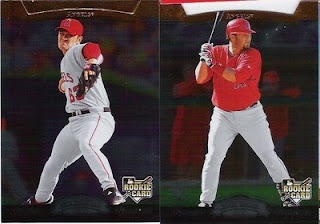 Here we have two Angels RCs from this year's Upper Deck Timeline, both are the 2005 SP Rookie Short Prints which are 3 per box. Wilson appeared in a whopping SEVEN games this season with a big 6 ABs and a stellar .167 average. I'm not even sure that he's still signed to the Angels. For as many cards as Thompson had in this year's baseball products, he sure hasn't done a thing to earn them. He appeared in two games in April giving up 4 hits, 5 runs in TWO innings worth of work. No wonder they sent him back down. Oh and here's the really strange part about these two cards, the Thompson is die-cut, but it's not punched out. I think I'll leave it that way. 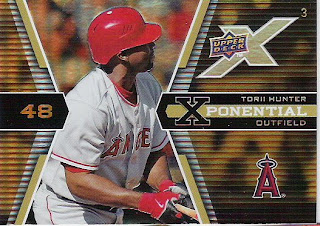 Being the Budget collector, there are certain brands that I just won't touch pack-wise, Upper Deck X was one of those this season. I usually will try to get SOME example of pretty much every set, but this one really didn't thrill me at all, despite the fact that packs were only two bucks at Target. I think I made the right decision after seeing this insert of Torii Hunter. Sure, it's a great LOOKING card at first glance, and it's all bumpy (I know, it's called 'embossed'). I simply cannot STAND having way too many parallels in the same set, and X seemed to me to be pretty much nothing BUT parallels. I'd like to think the photo on this card (same photo front and back, lame) is Torii watching a long homer sail out of the park, but who knows, he could have simply flied to left. 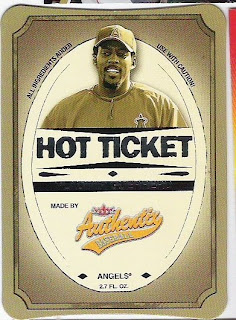 Here we have the obligatory Vladdy card, and as you can see, it's a bit different than your standard "insert", it's die-cut to seem like a beer bottle label if I'm not mistaken. According to Badwax there were something like 32 different insert sets in this release, which I think is a bit much, don't you? This design was also used for the relics, and I have to say, I'd much rather see a swatch where the Authentix logo is placed. I've actually seen and purchased retail packs of this product in the mark-down section of my Target's card aisle, so I'm not that unfamiliar with this product which was one of Fleer's last before becoming yet another UD brand. Besides, I kind of like the subversive nature of the card itself, though I'm also kind of wondering if the label is supposed to be a hot-sauce bottle instead, I mean who actually drinks only 2.7 oz. of a beverage?


That's it for the "modern" section of this blog post, now we'll be blasting back to the past, all the way from 2005 back to 1993, a year where the Halos finished the season an appalling 20 games under .500. Of course 1993 cards commemorate the 1992 season, when the Angels were actually one game worse than their 93 brethren. Yes, this was the era of Halo Ball that we fans would just as soon forget. Still, there were some highlights. OK not many, but a few. I chose these cards to feature not because they were memorable players (though they were pretty good players), but for their aesthetics or quirkyness.

BUT that's going to have to wait for another post, as I'm already way behind on errands and chores. So until then...
Posted by William Noetling at 11:14 AM

Eric likes Andy Pettitte too... Andy is his favorite.

Glad you liked it - I didn't know there was a card from 1963 in there. It's amazing the stuff that goes into those boxes and a person forgets about!