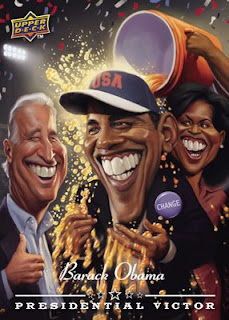 Oh boy, Upper Deck has chosen to end it's Presidential Predictor program with a single card of our newly elected President Barack Obama, and they're GIVING it away. Yes, that's right, it's free, but you have to go to one of a handful of card stores in your area and buy something. I suppose that's OK, you have to support a brick and mortar store to get the card. In my area there's two stores that will have it, so I'll try one then the other, because I wouldn't mind having more than one copy of this bad-boy.

Read the back of the card though, there's a phrase in there that to me seems like a back-handed compliment, or at least an inappropriate one. See if you can guess which phrase I'm talking about. Oh and here's the press release from UD.

North Las Vegas, NV (November 5, 2008) – Maybe it wasn’t quite as lopsided as Ronald Reagan’s 49-state thumping of Walter Mondale in 1984, but it was almost as convincing. On Tuesday, Democratic nominee Barack Obama was elected the 44th President of the United States after defeating Republican John McCain in their hard-fought race to the White House. And once again, Upper Deck is recording history by producing a single “Presidential Victor” card of Obama, bringing the trading card company’s year-long crusade of chronicling the 2008 Presidential race to a dramatic close.

Unlike the previously released caricature cards of many of this year’s candidates, the final card from Upper Deck will not be included in any of the trading card company’s releases. Instead, it will be shared through select hobby shops across the country. Each of the participating stores will receive no more than 100 cards, keeping demand for the sought-after trading card high.

“The best way for us to bring our ‘Presidential Predictor’ series come to a logical end was to release a ‘Presidential Victor’ card showing the winner,” said Chris Carlin, Upper Deck’s hobby marketing manager. “We are happy to work with our most supportive hobby shops to provide them with these unique cards, which they can share with their customers. No matter which party you supported, this was a historic election, and this card represents a great way for Upper Deck to commemorate the 2008 Presidential race.”

With his resounding victory in this year’s U.S. presidential election, Barack Obama made history in more ways than one. Not only was he the first African-American to be nominated by either party as a candidate, but he is now the first of his race to be sworn in as Commander-in-Chief. Just like Tony Dungy’s accomplishment in 2007 when he became the first African-American head coach in NFL history to win a Super Bowl, Obama did the same for White House politics in 2008. “Change We Can Believe In” was his campaign slogan throughout the year. Now it’s time to start believing.

The Barack Obama Presidential Victor card will be available in mid-November as a gift with purchase of any Upper Deck products at hundreds of hobby shops nationwide. Please visit www.presidentialpredictor.com for a list of shops that will be sporting these special cards.

Posted by William Noetling at 6:49 PM